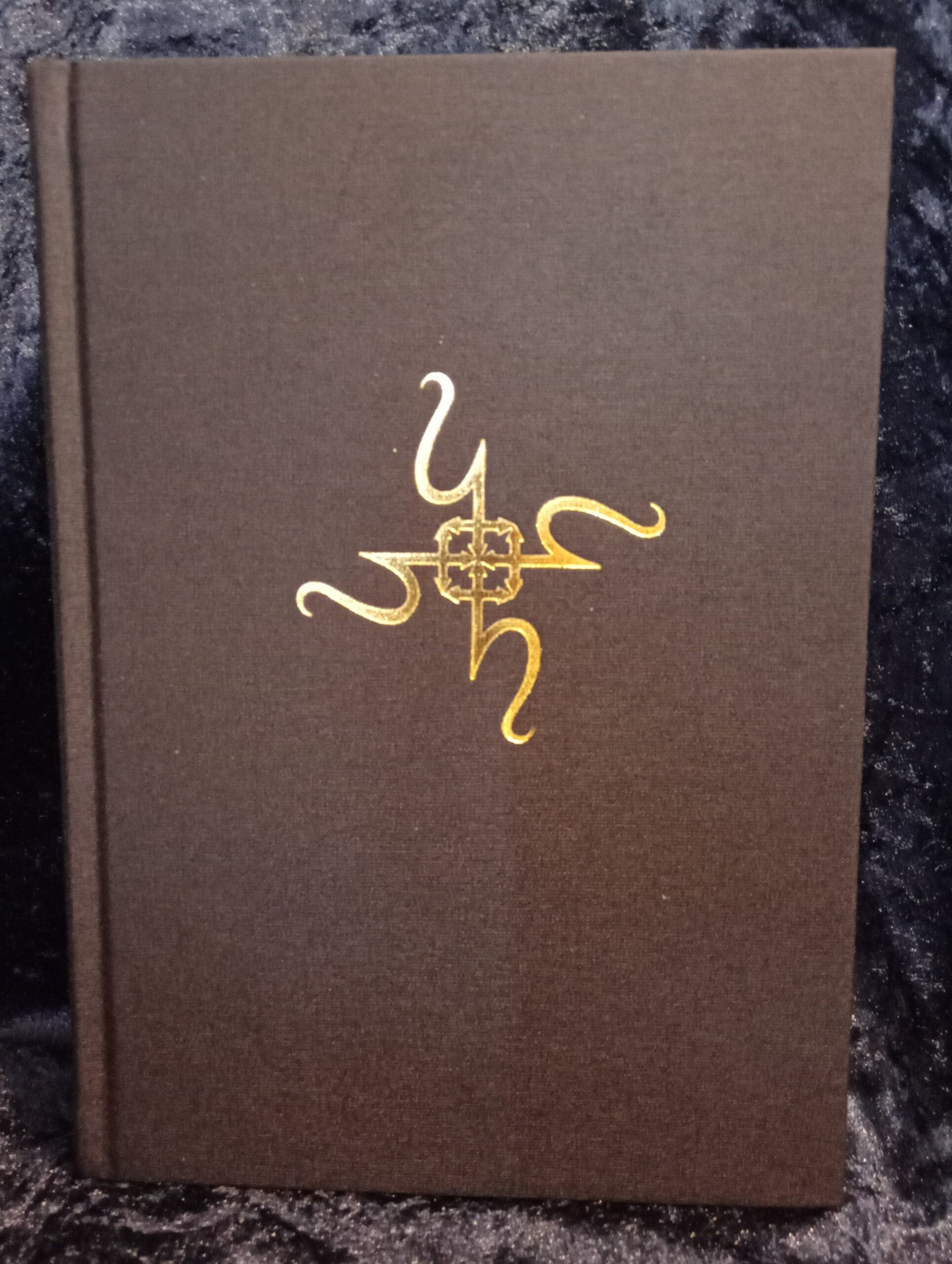 – The standard edition is bound in black cloth.

– The cover is adorned with gold foil sigil stamp to the front cover and gold foil lettering stamped to the spine.

Saturn Rising is a talismanic grimoire promoting the veneration, worship and pursuit of death in all its formless glory, whether manifesting as death-as-ending, death-as-change, or death-as-rebirth. While it may appear that creation and destruction are the two ends of a very broad spectrum, this work serves to guide the reader to the understanding that they are but two sides of a very thin coin, remaining forever inseparable. In order to create a work of art, we must first destroy a virgin canvas. Before we are able to compose a piece of music, we must likewise destroy the sanctity of silence. When we choose to create more Life for ourselves, we must also understand how – and what it means – to Die.

Saturn Rising is a fundamentally different text to most every esoteric publication to date. Its extensive use of dependable and reproducible modern science as a device for conceptual metaphor, in addition to its fervent championing of the Scientific Method remind us of those two short statements which grace the “Equinox” journal of the Argenteum Astrum: “The Method of Science — The Aim of Religion”. While some may regard as suspicious the inclusion of a highly-scientific foundation within a talismanic grimoire, its purpose is by no means to attempt to explain-away any spiritual experience in terms of psychological – or other – wholly-physical phenomena. Rather, it is to provide a common foundation and a base of universal definitions by which spiritual experiences may be communicated, systematically evaluated, and if possible, even reproduced. Surely, there can be no better model to adopt than that of modern science if one wishes to attempt the reproduction – and study – of spiritual, mystical and paranormal phenomena.

The greatest benefit to the use of science in a work such as Saturn Rising is the great deal of conceptual standardization, and incremental advancement made possible. Whereas once, religious metaphor was used to explain even the most elementary physical principles we see all around us in the natural world, and which we now take for granted. Over the course of time, our understanding of Nature has progressed to such a degree that we are now able to reverse this practise, and instead use scientific examples of well-known phenomena to classify our many varied experiences, allowing for the systematic exploration thereof. When dealing with such potentially-volatile concepts as death-worship and the integration of the death-current into our existing magical and religious systems, it is useful beyond measure to be able to approach – and adopt – these often-dangerous ideas in a manner, and at a pace best suited to ourselves alone. This is perhaps the most advantageous manifestation of all those which result from the founding of death-cultism upon a firm bedrock of scientific methodology.

The first section of Saturn Rising – entitled “Theory” – concerns itself with exploring the three principal manifestations of death energies; that is, death as an ending, as change, and as a rebirth. The fundamental nature of death itself is considered from the perspective of the author as a medical professional, the social phenomenon known as the “Seven-Year Itch”, and other social aberrations such as a disproportionate propensity for suicide – among numerous other topics – are treated with great clarity, depth of thought, and with two key concepts held at the fore. Firstly, how the consideration of these theoretical subjects may benefit either the understanding, or the application of death-cultism by the reader, so as not to waste their time and energy on trivia or minutiae. Secondly, how the cosmic archetype of Saturn and its associated correspondences ultimately tie-in to the concepts at hand, and what it is that Saturn may be able to teach us regarding death in each of its forms, throughout each of the chapters of this section.

Did you know that Tobacco is the plant most directly associated with Saturn? As is the elemental metal Lead, while Saturn itself is related to both Death, and the passage of Time. What most people do not know, however, is that a number of commercial American tobacco crops are fertilized with material in which extremely high concentrations of a radioactive version of the lead metal may be found. All we need do is add a little time, and it’s little wonder that cigarettes are related to so many cancer deaths. At each step of the way, there is a direct and undeniable link to both death in some form, and Saturn as the archetypal representative thereof, while associations such as this prove themselves to be a recurrent theme throughout the entirety of this work, both quite by accident and yet with an almost unbelievable frequency.

The second section of Saturn Rising – entitled “Practise” – deals with the real-world application of established Western Ceremonial Magical techniques, the standardization of fundamental magical definitions using scientific methodology, the construction and employment of ritual tools, the nuances of magical timing, the overriding procedure behind the modified Western method of ritual magic as presented in this text, and a secular, non-ceremonial form of magic which has heretofore seen mention in various books of Chaos – and of course, other – postmodern magical systems, yet not been fully explained in practise, nor had its fundamental workings hypothesized about to any great degree. Both of these oversights have been addressed in Saturn Rising, and a not-only complete, but also eminently workable form of creative magic – similar in some respects to the sigil magic techniques of Austin Osman Spare and Kenneth Grant – comes to the fore as a unique and incredibly flexible means by which future events may be easily molded and shaped to an incredible degree of acuity.

Finally, Saturn Rising closes with a selection of rituals designed to initiate the practitioner into the current of Saturnian death-cultism. The focus of these rituals is to provide a solid framework by which the sole magician may engage with, manipulate to their own ends, and apply in whatever fashion they see fit the energies of death, including integration into their own system(s) of magic and spirituality. The rites themselves include techniques by which gateways into the spiritual realm – including those areas in which angelic and demonic entities are said to reside – may be opened, allowing for a greater degree of contact with spirits, a deeper immersion within the subjective experience of ritual evocation, and the control of non-conscious energy for all manner of interesting ends. The concluding ritual provides the reader with the means to ritually charge objects with spiritual energy, or even invite the habitation of a spirit – again, including angels and demons – within the object in question, usually with the understanding that the particular spirit employed will continue to influence the magician’s life in a positive way, so long as the object sees frequent personal contact. It is for this reason that enchanted jewelry is most commonly encountered, but it must be understood that this situation is a mutual exchange and not one of spiritual dominance, or the use of magical force against the will of an entity.

Overall, Saturn Rising is a unique grimoire which aims to further the conscious acceptance and understanding of the death current, even to the point of venerating this ubiquitous and universal element within the natural world, of which the spiritual and magical realms are but a small part.