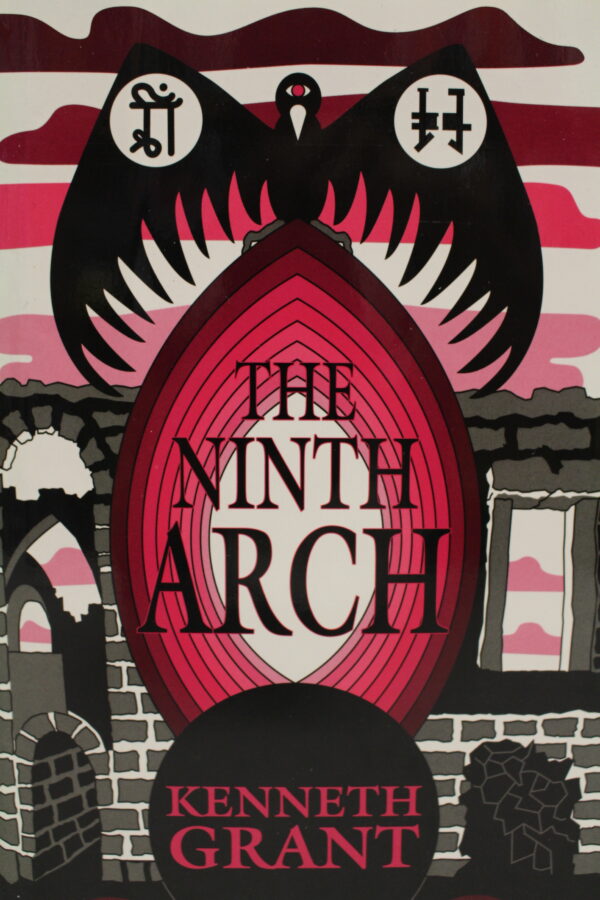 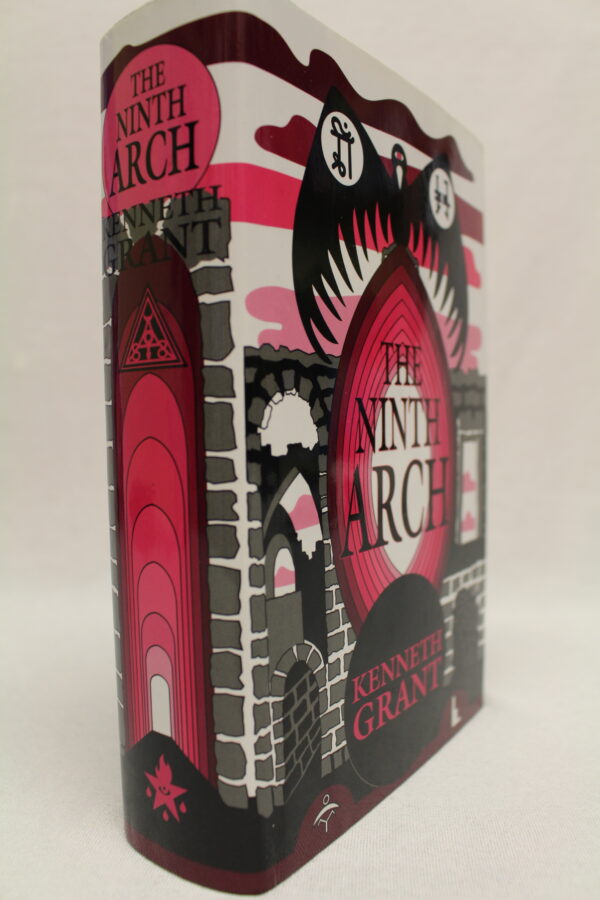 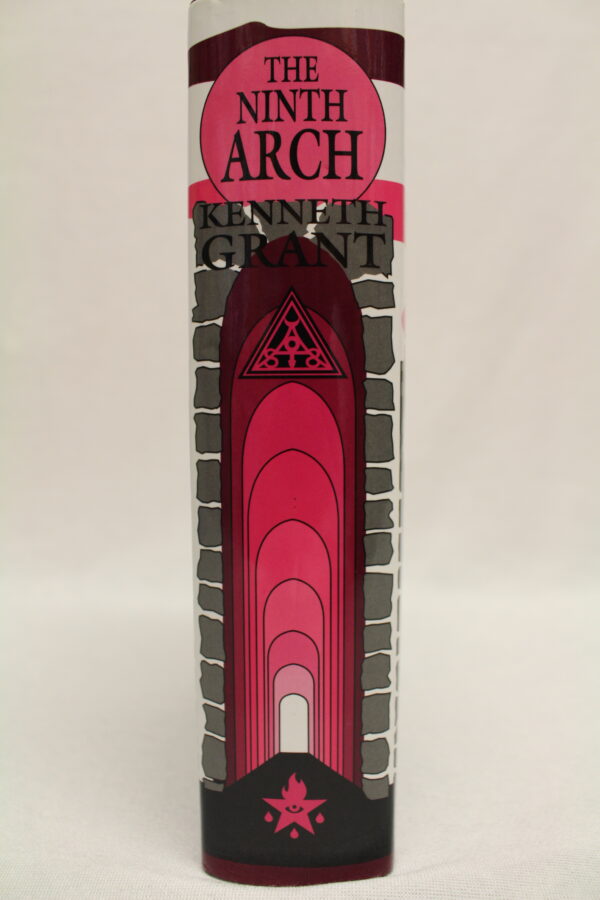 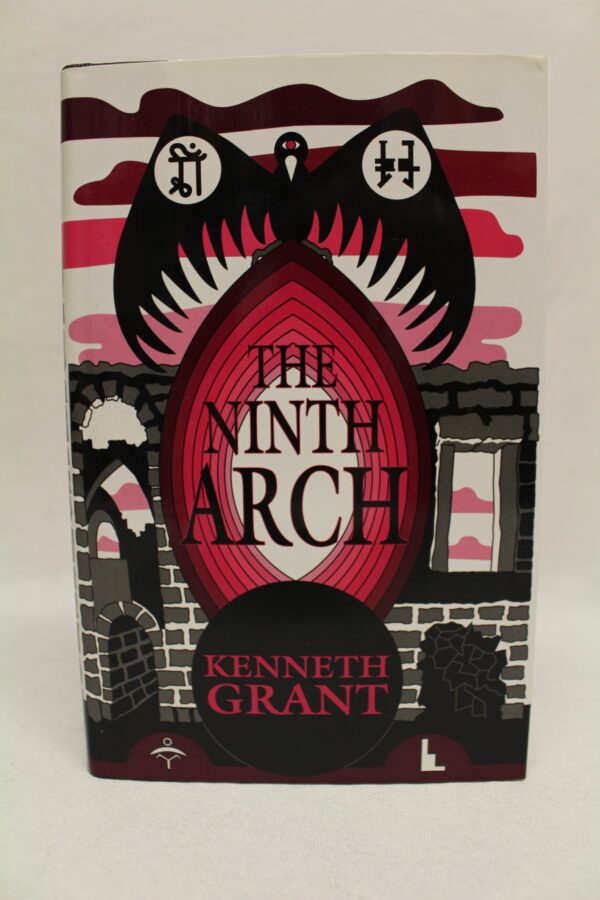 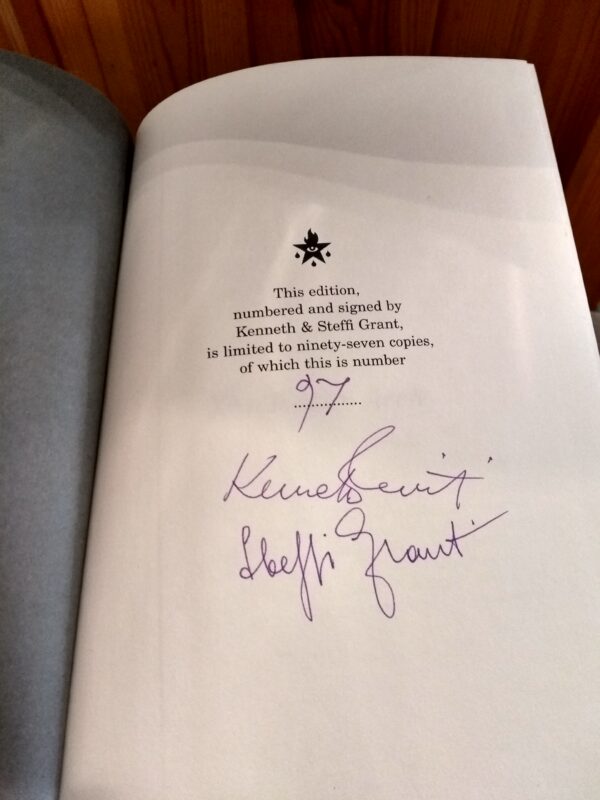 This is the 2002 1st deluxe edition, signed by both Kenneth and Steffi Grant

The Ninth Arch, comprising the Book of the Spider (OKBISh), is the final volume of a series of Trilogies which trace the emergence into historic times of an ancient body of occult doctrine known as the Typhonian Tradition.

In order fully to understand its purpose and content, The Ninth Arch should be scanned against the background of the larger canvas on which it is painted. Such an approach will facilitate insight into the Oracles of OKBISh and their accompanying comments. As an additional aid to focussing salient features of the Tradition, the author’s Nightside Narrative, Against the Light (Starfire Publishing, 2016), should serve as a helpful and explanatory ‘footnote’ to the circumstances existing at the time OKBISh was ‘received’.

The Oracles were communicated audibly, and occasionally visually, to various members of New Isis Lodge (1955-62) and at certain stages of magical ritual. The Current which generated the material began, sporadically, as early as 1939, with the initial movement of a transmission which developed over the years into the text known as the Wisdom of S’lba (see Outer Gateways, Starfire Publishing, 2015). In 1945, the Wisdom – then in its nascent stage – was recognized by Aleister Crowley as an authentic communication. From that time, the Informing Intelligence went on to complete the Wisdom, and proceeded to produce the massive series of Oracles presented in The Ninth Arch. The mode of reception has been described in the Introduction. The method of documentation confirms beyond cavil the validity of serial qabalah, as used previously in analyses of the Wisdom.

The richly complex pattern of magical correspondences, in both cases, has proved of unparalleled value in determining genuine contact with occult forces possessed of Knowledge and Prescience concerning important terrestrial Events. That the pattern reflects direct contact with an indefinitely ancient yet ever new Typhonian Gnosis, is demonstrated by the application of relentless and rigorous qabalistic exegesis, as recorded in the comments.

For readers interested in significant relationships between Numerical (physical) and Magico-Mystical (metaphysical) concepts, The Ninth Arch contains an exhaustive thesaurus of the Typhonian Tradition. But beyond considerations of gematria, the Oracles of OKBISh adumbrate Events likely to overtake planet Earth within the lifetime of many of the book’s readers; and – for individuals who are able to interpret the Oracles in terms relative to their own magical universe – they issue warnings of the dangers that lie ahead of those unprepared to invoke the Sign of Protection against the oncoming wave of Outer Forces set to assume control of the planet. Now, at the turn of a millenium, it seems appropriate to release this Knowledge.