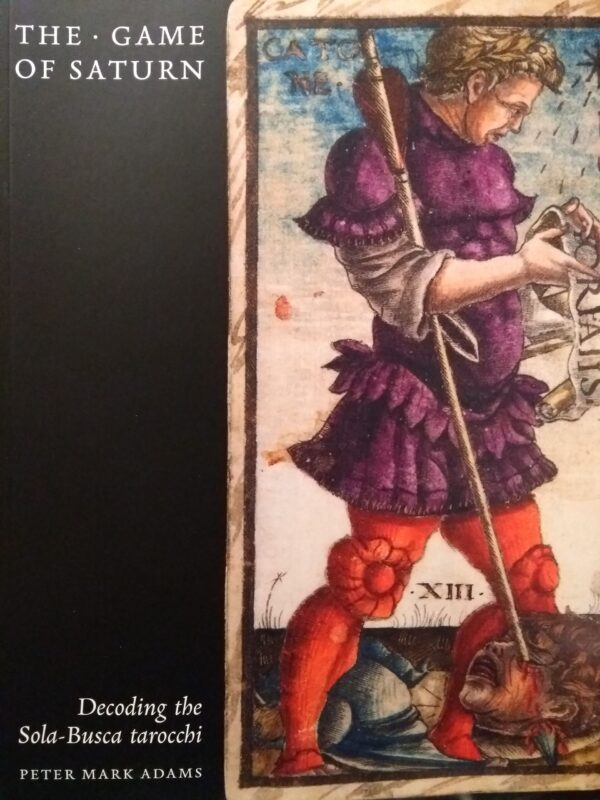 The Game of Saturn is the first full length, scholarly study of the enigmatic Renaissance masterwork known as the Sola-Busca tarot. It reveals the existence of a pagan liturgical and ritual tradition active amongst members of the Renaissance elite and encoded within the deck. Beneath its beautifully decorated surface, its imagery ranges from the obscure to the grotesque; we encounter scenes of homoeroticism, wounding, immolation and decapitation redolent of hidden meanings, violent transformations and obscure rites.

For the first time in over five hundred years, the clues embedded within the cards reveal a dark Gnostic grimoire replete with pagan theurgical and astral magical rites. Careful analysis demonstrates that the presiding deity of this ‘cult object’ is none other than the Gnostic demiurge in its most archaic and violent form: the Afro-Levantine serpent-dragon, Ba’al Hammon, also known as Kronos and Saturn, though more notoriously as the biblical Moloch, the devourer of children.

Conveyed from Constantinople to Italy in the dying years of the Byzantine Empire, the pagan Platonist George Gemistos Plethon sought to ensure the survival of the living essence of Neoplatonic theurgy by transplanting it to the elite families of the Italian Renaissance. Within that violent and sorcerous milieu, Plethon’s vision of a theurgically enlightened elite mutated into its dark shadow – a Saturnian brotherhood, operating within a cosmology of predation, which sought to channel the draconian current to preserve elite wealth, power and control. This development marks the birth of an ‘illumined elite’ over three centuries before Adam Weishaupt’s ‘Illuminati.’ The deck captures the essence of this magical tradition and constitutes a Western terma whose talismanic properties may serve to establish an initiatory link with the current.

This work fully explores the historical context for the deck’s creation against the background of tense Ferrarese-Venetian diplomatic intrigue and espionage. The recovery of the deck’s encoded narratives constitutes a significant contribution to Renaissance scholarship, art history, tarot studies and the history of Western esotericism.