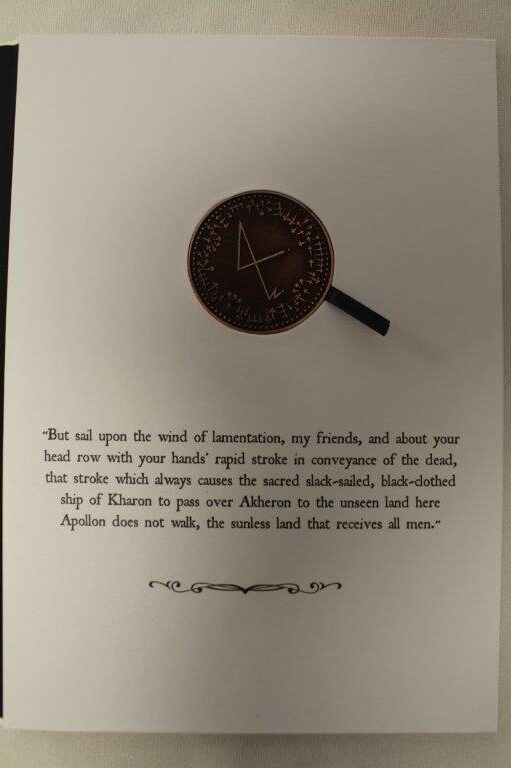 An unread copy. Some minor shelf wear to the slipcase

Lilonon Ananael is Nikolai Saunders’ latest effort, the follow-up to the greatly received Claves Regni. The core of this new work is the monumental Ritual of Lilonon Ananael, a ritual designed to familiarize the novitiate with the various applications of the angels of Shemhamphorash and the nature of the governors of the Aethyrs. The governors themselves rule over various regions of consciousness and their legions of subservient spirits. They also correspond to the twelve tribes and the application of the governors through these twelve tribes should prove sufficient grounds for the novitiate to explore throughout their magical career. As it was with Saunders’ previous works, Lilonon Ananael is a practical grimoire in the most classical sense of the word, and extensive ritual guide to the complex art of evocation.

The undulations of Light and Shadow, Good and Evil, Day and Night, are the dualistic representations of Truth perceived by our individuality. In other words, good and evil are simply matters of perspective; what is poison for one may prove profitable for another. However, in terms of Will it is that formula of The Magician in opposition to that of The Mystic. That is why certain specific operations in Lilonon Ananael are designed around Attainment or Enlightenment, while others are for more practical ends. One can not only exist as a magician or a mystic, anymore than one can be completely dominant or submissive in their dealings with others.

As the follow-up to both Arbor de Magistro and Claves Regni, the connections between the three books are interwoven in the ritual elements contained within. The branch of Enochian Magick represented by these three books, in conjunction with the Solomonic Form within, are representative of the Current of The Star System known as Scorpioniis upon Terra Munda. The Astrum Antares is represented in some of the various rituals, as was in Arbor de Magistro and the Aethyric Rites, specifically. The second of this series is Claves Regni, and while there are no spirits from within the aegis of Enochian Magick, the language used within, the various calls, and the invocations are strongly representative of Enochian. This, in addition, to the Enochian Calls used in the ten directions of the Temple, weave various threads into the fabric of the Work. The balancing of these occurs in this third book, Lilonon Ananael, where the Governors of the Aethyrs are called within their native environment and the spirits of Shemhamphorash are counterbalanced in their light and dark polarities. The Union of these Spirits corresponds to the passionate union of opposites above the Abyss nicely, which is a crucial element of Crowley’s vantage point from within The City of Pyramids. The Astrum Antares is expanded upon within the text following the Rite Lilonon Ananael and several of the prerequisite rituals (or Outer and Theurgistic Rites) are represented. The Theurgist of The Aires (or that of the Astrum Antares) will then be able to accomplish the stocking of their Arsenal, or the fashioning of the several magical tools needed to accomplish the Work on High.

Lilonon Ananael is a massive tome, spanning 600 pages and with almost two hundred detailed sigils and illustrations, a must have for any serious practitioner of the Arte.

This is, without a doubt, Fall of Man’s most luxurious and ambitious release.